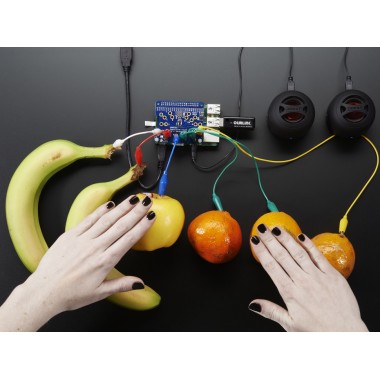 This touch-able add on HAT for Raspberry Pi will inspire your next interactive project with 12 capacitive touch sensors. Capacitive touch sensing works by detecting when a person (or animal) has touched one of the sensor electrodes. Capacitive touch sensing used for stuff like touch-reactive tablets and phones, as well as control panels for appliances, which is where you may have used it before. This HAT allows you to create electronics that can react to human touch, with up to 12 individual sensors.

The HAT has 12 'figure 8' holes in it that can be gripped onto with alligator clip cables. Attach one side of the clip to the HAT and the other side to something electrically conductive (like metal) or full of water (like vegetables or fruit!) Then start up our handy Python library code to detect when the object is touched. That's pretty much it, very easy! For advanced users, you can also solder to a pad to make a slimmer & more permanent connection.

Works great with Raspberry Pi Model A+, B+, or Pi 2. This HAT can be used with Model A or Model B but requires purchase/soldering of a extra-tall 2x13 header instead of the 2x20 included.

We're working on a detailed tutorial, meanwhile you can check out the tutorial for the non-HAT/breakout-version of this chip with the Raspberry Pi here which uses the exact same library and code. We have examples for reading touches, turning touches into keyboard KeyUp/KeyDown presses (so you can make a veggie-keyboard) as well as an audio player that will play a sound per sensor (fruit drums!)

Each order comes with a Capacitive Touch HAT and a 2x20 socket header. You'll need to do some light through-hole soldering to attach the headers onto the HAT circuit board, but its easy to do with basic soldering tools like a soldering iron and rosin core electronics solder. You'll also likely want to pick up a 12 pack of alligator clips!

Please note! This kit does not come with Raspberry Pi, alligator clips, speaker, or delicious fruit! However, we do have all of those in the store. Well, all except fruit - despite being called Adafruit, we do not actually sell fruit.