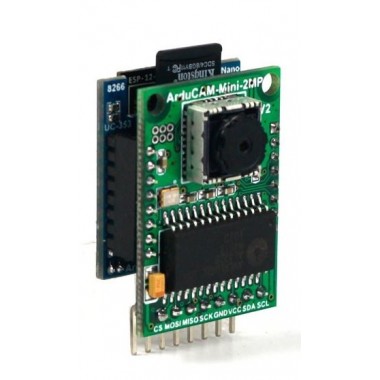 The evaluation kit is designed for low cost WIFI IoT camera based on ArduCAM-Mini-2MP-V2 and ArduCAM-ESP8266-Nano modules. User can implement a 2MP WIFI camera using HTTP or Websocket protocol on ESP8266, and the camera can be acted as an AP and mobile phone/PC can connect to the camera directly or acted as a Station which connected to the home router. The kit can take 2MP full resolution JPEG still image, but streaming low resolution low frame rate video due to the limitation of ESP8266. The kit can be USB powered or battery powered with buildin charging circuits. The kit can also be used separately, it is identical to an ArduCAM-Mini-2MP camera and a ESP8266 module.

Getting Started ESP8266 with Arduino IDE:

Note: the Battery  and SD Card  are not included in this package
Note 2: Check the PDF format MANUAL, it is very helpfull  to start using the product