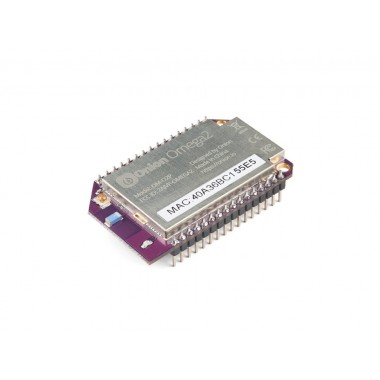 What the heck is an IoT computer? It is a Linux computer designed specifically for building connected hardware applications. It combines the tiny form factor and power-efficiency of the Arduino, with the power and flexibilities of the Raspberry Pi.

For those extra demanding projects, we’ve created the Omega2 Plus. It uses the same chipset as the Omega2, but has double the built-in storage and memory, and on top of that, there’s a MicroSD slot built in, so you’ll never have to worry about running out of space.

The Omega2 IoT computer is Onion’s Linux-based, WiFi development board designed to enable makers of all skill levels to build connected hardware applications. Plug in your Omega and it will boot the operating system right away, allowing you to develop in your favorite programming language, create web applications, and interface with a variety of hardware with minimal time and effort spent getting started.

The Omega was built to interact with other hardware, so it has a wide variety of hardware interfaces. It has dedicated pins for USB2.0 and Ethernet as well as 12 GPIO pins that can be controlled by the user. These GPIOs can support the I2C, UART, and SPI serial communication protocols.

The best part is that it’s tiny, measuring 1.7″ by 1″ it takes up minimal space in the project.

The Omega2 runs an Onion-customized version of the LEDE (Linux Embedded Development Environment) Linux operating system, a distribution based on OpenWRT. Since there is a full Linux OS running on the Omega, users are not limited in their choice of programming language. Supported programming languages include:

The Omega’s OS comes equipped as a web server by default, so that other devices on the local network can interact with the Omega through a browser.

So what makes the Omega2 an IoT Computer? It’s a combination of the following:

The Omega2 is powerful and flexible enough to be the brain of almost any IoT device.

For the best experience and most functionality, the Omega can be plugged directly into any of a number of Docks provided by Onion. All Docks can be powered with a regular Micro-USB cable and contain a regulator circuit to safely provide 3.3V to power the Omega, so plug it in and get started with your Omega with no worries.

Each Dock adds unique functionality to the Omega, including exposing the Omega’s GPIOs, supporting the plug and play Omega Expansions, provide USB connectivity, among other things.