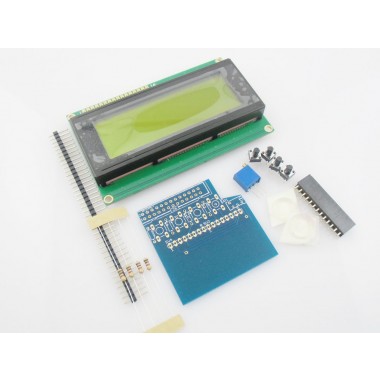 ﻿John Jay based in Georgia, USA, is a retired engineer who designed some boards for the Raspberry Pi to help his partner to learn Raspberry Pi. Although at first it was a small act that just for his friends, but with the growing people in the open-source community participating, more and more people find that these packages really works. So, he decided to releases these kits. Cooperated with Elecrow, these packages have been produced quickly. And here with Elecrow, we not only ensured the quality, but also released and collected the usage or Experiences of these kits, to help more people enter the world of Raspberry Pi as quickly as possible

This Read Your Pi Kit is an easy assemble kit designed to integrate a 20x04 LCD screen onto your Raspberry Pi. The board enables the LCD screen to plug directly into the GPIO connector on the Raspberry Pi and features four push buttons for user input! The kit is compatible with both C and Python. Please refer to the Solder Guide for how to solder this kit.